Starved Rock Runners holds their Canal Connection 10K every year in November. 2008 was the third year for me. Some IT band issues in late August forced me to back off the running mileage substantially, so my expectations were pretty low for this race. I figured just finishing would be enough. 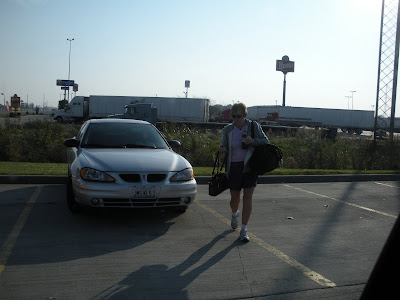 Nancy was the driver today. She picked me up at 7:45 a.m., then we collected Linda and sped off to Lincoln, where we collected Deb. Here is Deb vacating her vehicle in the parking lot of a truck stop off the interstate.

With Deb safely stowed away, it was on to McLean and the Dixie Truck Stop where Helen was waiting. 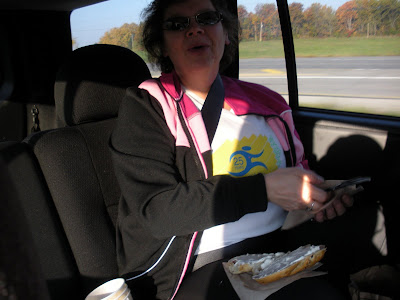 It is worth mentioning that Linda was in an accident on Halloween where she was rear-ended by a young man wearing a yellow tutu. Linda herself was sporting a witch's outfit complete with cape. The police must have had a lot of fun with that one. But unruffled by this bit of bad luck, she was gracious enough to get Panera bagels and coffee for everyone. 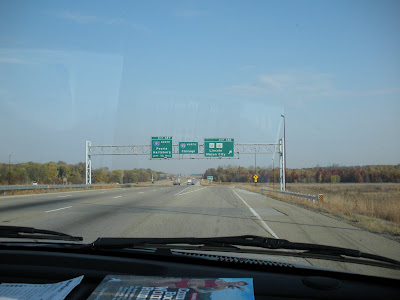 In 2007 we took a wrong turn and ended up going through Peoria. This turned into a terrifying odyssey across northern Illinois that took us past a wind farm. A wind farm. Thanks to Nancy's stuntwoman-quality driving, we made it to the start of the race but it was touch and go. In an effort to ward this off, the Sutzmobile was equipped with a road atlas and no less than three Mapquest printouts. Travel time was supposed to be 2 hours 13 minutes. I think we hit Utica in 2 hours, and that was with three stops.

This shot of the interstate shows the first of many signs to Peoria, which is where it all went wrong last year. We're a much savvier bunch now. 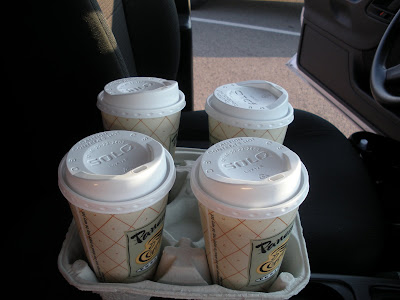 We had some delicious coffee from Panera. With all of that caffeine, you would think it would be possible to run pretty fast. 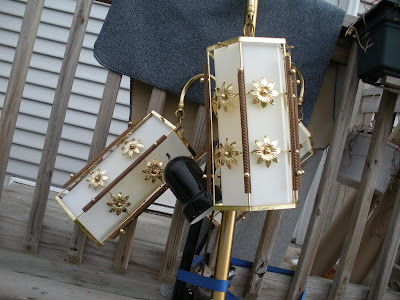 Utica is a picturesque little river town. Race headquarters is in the elementary school. Basically you take the main drag into town and just follow the cars. Next to the school was an old house in the process of being refurbished. There was a bunch of old stuff in the garbage, and I saw this amazing light fixture!!!

It was a great race, I PR'd. Still slow, but two minutes faster than last year. But who's counting? Not me, I'll never get an age group award unless everyone else stays home that day. For me, a solid B.O.P., the appeal of this race is a) the awesome sweatshirts that they give away and b) delicious pizza. Just take a look at this pizza. Yeah, it's as good as it looks.
Posted by Anne B at 6:24 PM 4 comments: