Aiming for a really big goal is always inspiring at first. But, since we are human, the realities of preparing for even the most amazing of challenges can become mundane at some point.
In your quest for that finish line—and as you work to get it done day after day—I encourage you to remember that you are creating a vehicle for doing cool stuff. Don't lose sight of the fact that the fitness, confidence, skills, and self-knowledge you are developing on the path to your race can be applied to many other areas of your life.
Posted by Anne B at 10:19 AM No comments:

I have two friends named "Mary R." At the Jingle Bell 5K a couple of years ago, one of them wore a pair of reindeer antlers while she ran the race, so from this point forward, she shall be known as Reindeer Mary.

ANYWAY...Reindeer Mary and I were talking races over margaritas at Xocimilcos about a month ago and she mentioned something about "skipping the Olympic distance and just going for a half ironman" in 2011. I agreed that this seemed like a great idea.

I am sure it will continue to seem like a great idea until about May or June of 2011, at which time it will seem like a very, very bad idea.
Posted by Anne B at 11:02 AM 2 comments:

Sunday, September 12, the Springfield Bike Club sponsors their annual Capital City Century ride. It's a great event, offering something for everyone - I think there is a 15 mile ride for kids/beginners, all the way up to a 100 mile option.

We opted for the Metric Century this year (that would be 62 miles). Not a lot of to report here, we showed up at the Lake Springfield Beach house and met up with a fairly large group. I think there were 16 people. We let the really fast riders go first, then followed behind at 7:00 a.m. Temps were in the low 70s but as the sun came up, it heated up a bit. And the wind picked up.

I did ok for about 30 miles, hanging on toward the back. We were averaging about 19 mph, which is pretty fast for me. We stopped briefly in Auburn, at the main rest stop, then headed south out of Auburn. I guess the 19 mph was just some freakish warmup because the leaders picked up the pace. I hung on as long as I could and then just was like "screw it" and dropped off the back. I rode alone for about 8 miles. The wind had picked up, the scenery was mind numbing. Newly harvested cornfields stretching off into infinity. Completely flat. Except for a big overpass hill. With more wind.

At the next rest stop, I found most of the group. Evidently the wind had done a number on the tight little formation, as the really strong people who could ride through hurricanes and other natural disasters had not only continued on, but had actually picked up the pace and left the weaker riders to fend for themselves. This gave me some satisfaction.

Back to the Beach house. Being some of the first to finish the ride, we also had the luxury of enjoying lunch at its freshest. Fried fish, hot dogs, brats --- standard picnic fare that tasted so good. Oh, and did I mention Fat Tire and Miller Light?
Posted by Anne B at 10:31 AM No comments:

Something to show for 20 years

In August I hit the 20-year milestone at the engineering company where I work. I won't go into any deep philosophical reflecting on this event because for the most part, my day consists of plinking away at a computer doing graphics and brochures. The mood is light, it's a good place to work and everyone there is pretty tolerable.

Upon attaining 20 years, employees are presented with an additional week of vacation and a pretty nice cash bonus. Under normal circumstances, a windfall goes to pay off bills. But I figured that I would never work 20 years at another company, so this was a special windfall. I needed something special. I needed a new bike. 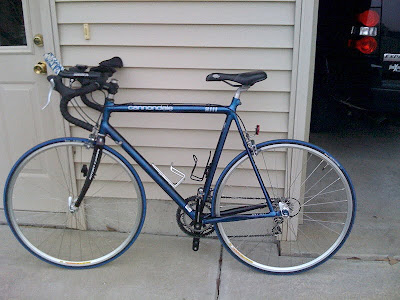 Most of my riding been done on my old Cannondale SR800, whom I call Streak. Streak is a good, solid bike. Earlier this year, I bought a set of Ultegra components off my buddy JHouse, and had those installed on my tri bike. The 9-speed Shimano 105 drivetrain was subsequently installed on Streak, along with STI shifters.

There were Campagnolo rims on this bike, but those unfortunately had to be replaced. New blue wheels completed the project.

It was almost like getting a new bike. I think I spent more upgrading Streak than the bike cost originally. Here is a shot of Streak with his fancy new stuff. He is looking good and ready to go for a ride. 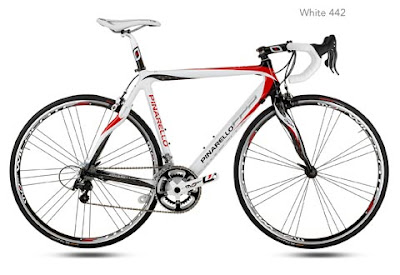 Being a not-so-good rider, I struggle to keep up with S. Since Streak is near and dear to my heat, the only option was to purchase an additional bike with my milestone bonus. I assigned research of this important project to JHouse, who spent countless manhours at work to come up with a list of possibilities. After much agonizing, I decided upon a Pinarello FP2 SRAM.
I have to say that this bike rides like a dream. I still get spit out the back on group rides, but I can't blame the bike anymore.
Posted by Anne B at 10:20 AM No comments:

Wow, it’s been nearly two years since I devoted any attention to The Flailing Years. At this point, it might be easier to scrap this blog and start fresh. Or just abandon the whole blog notion.

Let me see if I can summarize what I’ve been up to for two years.

January 2009 – Siberian Express 10K Trail Run, Danville, IL. This race was an absolute blast. The Kennekuk Running Club sure knows how to put on an event. I came in toward the last of the pack. Most of the course is single track trail through thick woods, which makes it difficult to pass people. I got behind a woman who, I am pretty sure, was either blind or close to it, and was being led by a man. It was amazing to watch her navigate the ravines and muddy low areas.
February 2009– Gasparilla Festival Half Marathon , Tampa FL
Memorable this year in that just as Karen and I were finishing on Bayshore Boulevard, a full blown tropical storm opened up. We just barely made it across the finish line before high winds and rain forced the post-race party to move inside the Convention Center.

May 2009 – Indianapolis 500 Mini Marathon. In 2006, I trained for this race with the Half Wits. It was an amazing experience, being my first "big" race. I kept intending to return. Went over with Nancy, Linda and met up with some others, but for some reason it wasn’t as enjoyable. I think that the novelty had worn off, or maybe the race was just too big. The weather was nasty - overcast and cold, really really cold for May. It was the height of the H1N1 hysteria. The night before the race we met up with some other ladies at an Italian restaurant and it was pouring down rain. I stayed at an older hotel that wonderful, right next to St. Elmos Steakhouse.

June 2009 – Tri Shark sprint Triathlon, Bloomington, IL – This was the most enjoyable event of the season for me. Wetsuit friendly, a new race. Went up to Bloomington with Mary R. Felt calm and in control the entire time. We both won a bottle of Rocket Shower as a door prize afterwards.

July 2009 – Stoneman Sprint Triathlon, Springfield, IL – Swim went badly for me. The course was measured long (supposedly). There were waves, people panicking around me. I couldn’t get into a good groove and ended up breast stroking much of the swim. Oh well, I did it…

October – Chicago Marathon. WORST DAY EVER. The weekend before I was in the Emergency Room after a run with awful stomach cramps and vomiting. Tests, including CT Scan, failed to uncover anything and I was sent home. Ran the first 7 miles with Joni and then started having the same stomach problems. By the halfway point I was walking every tenth of a mile. I walked most of the last half. My stomach just hurt. No explanation for this, and it has never happened again. It was after this race that I made a pledge to myself that I would never, ever, EVER again sign up, train for, or in any way remotely entertain the thought of participating in another marathon.