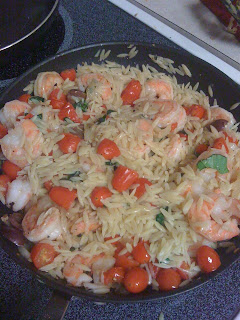 In my quest for healthier eating, I came across a recipe for
Shrimp and Orzo with Cherry Tomatoes . It took me about 45 minutes from start to finish, and that includes thawing out a bag of frozen shrimp, harvesting some basil leaves, and getting in a 20 minute Butt Bible workout.


Good stuff and it makes enough for leftovers the next day. I jazzed it up by tossing a handful of Kalamata olives into the mix. 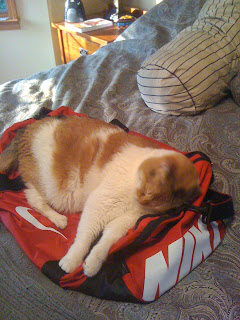 There are three cats in my life. For what it's worth, I always thought of myself as a dog person. There was always a dog associated with a particular phase in my life. Cats were there too but they kind of drifted in and out and existed in the background.

Cat Number 1 is an overweight and high maintenance calico named BeeBee. She was a barn kitten, born to a feral momma cat who set up house in a barn on my parents' property. At the tender age of 4 weeks, she contracted a particularly nasty respiratory infection that should have killed her. My daughter discovered the tiny, dying creature and my parents sprang into action, taking the kitten to our vet. I think Beebee lived at the clinic for about two weeks, enduring IVs and electrolyte treatments. The bill was astronomical.

Once you spend money on a wild cat, it becomes a domesticated cat. The question was what to do with this kitten once she recovered. Since my parents already had a crotchety older cat who would not have tolerated an annoying young thing and the thought of adopting the kitten out was unacceptable, I grudgingly accepted BeeBee into the household.

BeeBee, or Miss B, is a pretty good cat as cats go. She begs for food and tears up the rugs sometimes. She also attempts to prevent people from leaving the house by lying on their possessions. Here she is trying to keep me from leaving by staging a sitdown on my gym bag.

I Begin Training and Clean Up My Act

So it's official, I signed up for the Quad City Half Marathon on September 25th. That's not much of a horizon and I have done some serious slacking since Racine (July). During my period of slothitude that lasted from approximately July 18th to mid August, I learned that, like many runners, I crave the structure of a training program.

This morning I slogged through 6.61 miles by myself. To make things interesting I drove to downtown, parked my car and ran a different route -- over to Washington Park (drinking fountains and bathrooms) and back. There are a few respectable hills. Overall the run went well, maybe it was just the change of scenery more than anything. I really intended for this to be a little over 7 miles but was meeting Reindeer Mary for coffee at 8 and didn't get my ass out of bed early enough.

We had a great breakfast at Cafe Moxo in downtown Springfield. Mary's out for a while with what may possibly be a Morton's Neuroma and some nerve damage to her foot (can't believe that girl toughed out a half marathon with all this going on). Then perused the Old Capitol Farmers Market.

I recently decided to clean up my diet. Nothing too fancy, mostly just minimize or eliminate processed food, more fruits and vegetables ---- you know the story. My goal is to drop about ten pounds. After a week I have lost zero. But I feel a little better, maybe less like a bloated cow. My rings are looser on my fingers.

Couple of things I did this week:

So what is next?

Following Racine, I took a week off from any kind of physical activity whatsoever. Then I kind of woke up, looked around and wondered, jeez, what do I do now? Eight months of intense training had just come to a grinding halt.

I entertained the thought of doing an Xterra triathlon. It sounded fun and outdoorsy. I have the base for swimming and running, but mountain biking is a whole different animal. A couple of rides convinced me that road riding fitness does not translate very well to mountain biking fitness. I was exhausted after a couple of miles. I wondered what the cutoff times for the race might be.

I also slowly came to realize that my beloved bike, a 2001 GF Tassajara, could double as a boat anchor, needs new brakes and a better drivetrain, and doesn't quite fit me right. Having dropped a ton of cash on my tri bike over the summer, I could hardly justify upgrading it.

So I took S's bike out and gave it a whirl. It's a newer Specialized Hardrock, a pretty basic bike with disc brakes. I am used to the Tass's anemic V brakes. The Hardrock bucked me off on the first turn and left me with some nasty bruises and contusions. I love that word. Contusions.

Fortunately for me, a conflict came up and I was relieved to have an excuse NOT to try the Xterra. Next year perhaps, no way am I ready this year.

So maybe the Quad Cities Half Marathon in late September. I need to work on my running and having this goal might be just the ticket.

Let me give a shameless plug for a new race --- Camp Ondessonk is a Christian youth camp in Ozark, Illinois. The camp is located in the beautiful Shawnee forest. It's a trail runner's dream and for the first time, they are hosting a 10-mile and 5k distance trail race.

Date is October 22nd. From the brochure "The Moccasin Gap Trail Run will utilize a series of scenic and challenging trails within and surrounding Camp Ondessonk. This rugged 10-mile route will take runners past some of the outdoor highlights...such as Cedar Falls (the highest free-falling waterfall in the state) and past one of the 11 known Native American Stone Fort sites in Southern Illinois. The trail departs Camp to wind up the ridges and through the sandstone creek valleys of the surrounding Shawnee National Forest, eventually joining up with the River to River Trail. Runners will cross rock-bottom creeks, traverse ridge lines on old Forest Service roads, and climb a series of switchbacks including a stretch of trail boasting over a mile of sustained climb to a historic U.S. Forest Service fire observation tower."

My family has a long history with this camp, so this event is near and dear to my heart. I will definitely be making the three-hour drive south that weeekend. Now to start running trails...