I've been under the weather this week and as such, have been seeking out comfort food. Next to Mom's meatloaf, nothing screams comfort like home baked bread. Problem is, I've never made it. And I'm on a mission to eat clean, which means most recipes for homemade bread were off limits.

I found a recipe for whole wheat bread that sounded pretty simple. Plus it was "artisan" which implies that this is extra special bread. Perhaps even magical bread. It might have powers. I figured what the hell, I would give it my best shot.

Armed with a recipe printed off the interwebz, I brought out the largest bowl that we own. It's actually for potato chips or popcorn but it would do.  Into this bowl, I mixed the following. Also, the instructions implicitly stated do not knead the dough, just get it mixed up.
1 1/2 packets of yeast
1/2 cup honey
5 TBS oil (I used EVOO)
1/2 tsp sea salt
1 1/2 cups lukewarm water
1 1/2 cups lukewarm milk
6 2/3 cups whole wheat flour

The instructions called for allowing this concoction to rest for exactly one hour and 40 minutes and then place it overnight into the refrigerator, so I covered the bowl with a towel and set it aside. Problem is, I started this venture at 7 o'clock at night. My timing was poor, I was on Nyquil and fading fast. So Steve was entrusted with the task of moving the dough into the basement fridge.

In the morning I retrieved the dough. It had risen slightly and looked a little bit like an oversized wart, crouching in the big bowl. Steve was doubtful and said that it didn't look right.  I got defensive and reminded him that this was ARTISAN bread and it was supposed to look kind of dense and lumpy. I could tell from his confused expression that he did not have a clue what artisan bread was. Just to be sure, I googled the term and found an entire page devoted to explaining this concept.

I turned the bread out onto a pizza stone in two big lumps and shaped them into loafy forms. Then I dusted the tops with flour and a little oatmeal, slashed (yes, slashed) the top with a serrated knife, and popped them in the oven for 50 minutes, 350 degrees. An important thing to note is that you have to put a broiler pan in the oven on the shelf beneath the bread and just as you are putting the bread in, pour a cup of water into the pan.  I guess it steams the bread.

As the 50 minutes ticked away, I peered through the glass door occasionally, wondering how this experiment was going to turn out. Maybe Steve was right. It looked pretty strange.

But pretty soon that awesome smell of baked bread began to fill the house and the lumps puffed up a bit and began to brown. The bread was a winner. I could hardly wait to let it cool enough to slice it. I had a couple of slices with butter and a bowl of soup for lunch.

The recipe made two pretty good-sized loaves. If you wanted a "deeper" bread that would be easier to toast, you could use a loaf pan and probably increase the baking time somewhat. I think this would be really good with apple butter or strawberry preserves. 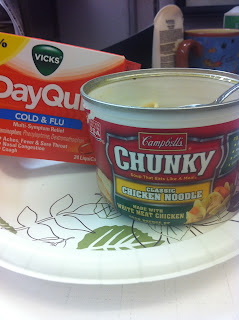 There's a mean virus making the rounds and it caught up with me earlier this week. I don't know if chicken soup really helps with colds but I have to say there's something about the overly salty broth that holds a special appeal when I'm under the weather.

Still working on my 2012 schedule but tentatively, it's looking like:
Not one to make a lot of New Years resolutions, but I do plan to drop the Diet Pepsi habit. That's going to be a rough one.  I drink one can per day, every day, and have done so for years. But there seems to be a lot of evidence that drinking diet soda actually contributes to weight gain. I'm anticipating some nasty headaches for a while.

The other thing to work on is dropping 8-10 pounds by the time the Dells 70.3 rolls around. It stands to reason that reducing or eliminating the spare tire should help with aerodynamics in the water and on the bike, not to mention it would be nice to not cringe in horror at race pictures.